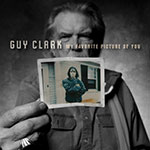 Cover of Guy Clark’s last album, with the title song about his late wife, Susanna.

Guy Clark was a crusty fellow with a laconic Texas reticence, which belied a whimsy that comes out in some of his songs, like “Too Much,”

and a keen eye for the essentials of life, as in his praise for “The Carpenter,”

Guy was speaking from experience; he was a luthier, a craftsman in wood as well as words, a poet.  Adam Sweeting in The Guardian:

Guy Clark, who has died aged 74, once commented that his twin occupations of songwriting and guitar-building were “just a way to while away the time until you die”. The many artists and listeners who have been touched and inspired by his work would beg to differ. Clark was never a chart-busting phenomenon, but he was the embodiment of the painstaking craft of the songwriter, where meaning emerged from fine details, carefully observed and polished. . .

Guy’s songs were more personal than Merle Haggard‘s, the references drawing more on his own experiences and images, but he had the same knack of translating them into the universal, as in “Let Him Roll”:

Well he could cut through the years to the very night
When it ended, in a whore house fight
And she turned his last proposal down
In favor of being a girl about town

Well when they went through his personal effects
In among the stubs from the welfare checks
Was a crumblin’ picture of a girl in a door
An address in Dallas, and nothin’ more . . .

As with Merle, for Guy verisimilitude was the highest criterion:

A laconic though riveting musical storyteller, Mr. Clark was adept at getting at the heart of an experience or an event.
“I really work hard at being true,” he told American Songwriter magazine. “And that’s where the uniqueness of the songs come out. I couldn’t have made them up.” (Bill Friskics-Warren in The New York Times)

Guy’s much younger cousin, Mary Lee Grant, found learning from Guy Clark as valuable as the literary pretensions of the eastern Ivy League:

When I studied literature at Yale, my professors transmitted the notion that the green hills of England and the streets of New York were the subjects worthy of great writing. But I knew differently, because I had Guy. I knew that the parking lot behind a Texas bar was art: “Sittin’ on the fender of someone else’s truck, drinkin’ Old Crow whiskey, and hot 7UP.” He had worked on the shrimp boats of Rockport as a teenager, and he showed me that they were poetry, as they sailed for the Mexican Bay of Campeche with the deckhands singing “Adios Jolie Blonde.”

I met Jack, the wildcatter in “Desperados Waiting for a Train,” when visiting my Aunt Rossie, (Guy’s grandmother), in the bleak little West Texas town of Monahans. She always fascinated me as a child because she had a wooden leg, which the doctor had amputated on the kitchen table when she was 12. She was a bootlegger and ran the Clark Hotel, where old men came to live and often stayed until they died. Jack was her boyfriend. I had seen the “old men with beer guts and dominoes, lying about their lives while they played.” Because of Guy, the traditional New Haven bar of Mory’s, where Yalies drank from silver cups and the Whiffenpoofs sang, held no more glamour for me than the Green Frog Café, where Jack sipped beer and played Moon and 42. . . (from the Corpus Christi Caller Times)

Guy visited Hillbilly at Harvard twice, once in our old studios under Sanders Theater, where Ol’ Sinc intuitively knew to lubricate the session with a couple of Dixie cups and a bottle from Tennessee.  That was in Sumptuous Studio A; I was in A Control, and put young Number One Son Andy on the counter so he could see.  Guy played “Blowin’ Like a Bandit” for him, Andy’s favorite from Better Days (1983), an album I played a lot at the time.  Later albums had less effect on me; the songs often seemed quirky and less relevant for a country show, though still little masterpieces of insight, irony, and wit.  The later songs I remember most were the country songs that others covered, especially Bobby Bare‘s version of “New Cut Road,” and Ricky Skaggs‘s hot-pickin’ “Sis Draper.”  Guy visited HAH again, with compatriate Verlon Thompson, but alas, there was no Sinc to grease the skids; it was just a duty call for him.

When I think of Guy Clark’s songs, most of all I recall “The Randall Knife,” the tribute to his father:

Who will write as moving a tribute to Guy?  James Beaty, in the McAlester News-Capital (Oklahoma), comes close, perhaps:

When I think of Guy Clark, I think of the young lion from the 1970s, who, with “Old No. 1,” amazed me upon first listening. It’s high on my list of greatest debut albums ever.

With Clark racked by illness in recent years, I felt shocked to see him aged, frail and seemingly in fragile health on some of his later television appearances. Sometimes, he seemed to walk with effort, occasionally using a cane. He appeared determined to keep performing as long as possible.

Still, he had the voice of a true American poet. During his later years, I couldn’t help but remember the lyrics of arguably his most well- known song.

“To me, he’s one of the heroes of this country, so why’s he all dressed up like those old men?”

He was a desperado waiting for a train.