Photos from the 2020 Joe Val Festival

Pickin’ in the Hallways at the JVF

It’s hard to believe it’s been two months since the Joe Val Bluegrass Festival on Presidents’ Day Weekend in February.  Harder still to remember that hundreds of bluegrass pickers and fans took over the entire Sheraton Hotel for three days, and even packed the Main Stage auditorium for the Sunday afternoon finale with the Dan Tyminski Band, and it all went off without a hitch.

There was an good deal of elbow-bumping instead of handshakes, which makes good sense at the height of flu season, even without any new bug to worry about.   Even in mid-February, there weren’t many cases of the Wuhan virus in the United States, and we assumed there wouldn’t be many people from China at the festival, so (rightly or wrongly) there wasn’t much chance of encountering it in a crowd of bluegrass and country aficionados.

In any event, the mood was festive and the performances were great.  As usual, I hung around with my camera (a new Canon Rebel SL3 with Canon 18-135mm lens, not a high-end rig, but close enough for country music), so here are, belatedly, a few photos.  It’s been two months, so I’ll keep comments to a minimum.  There are higher-resolution, downloadable versions of the photos on Flickr, too, HERE. 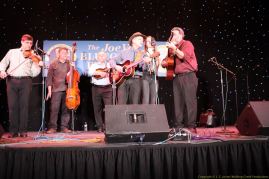 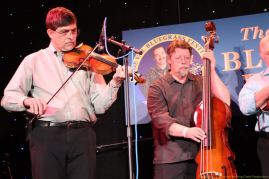 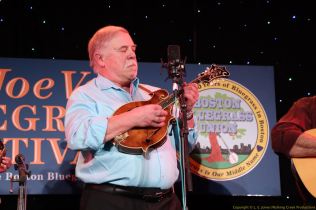 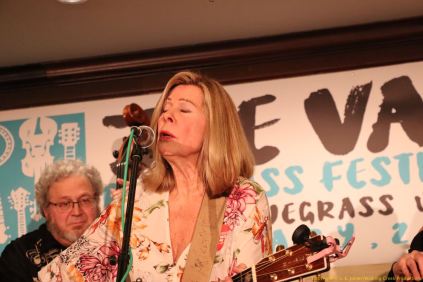 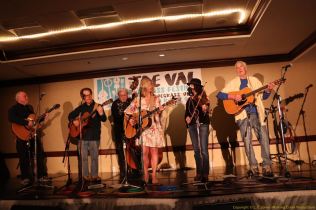 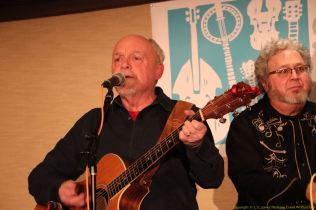 Downstairs, a gathering of bass fiddles spawned a few jokes of the “Who’s on first?” variety.  Fortunately the grandkids were absent this year, or we’d have to keep them from “Touching all the bases.” 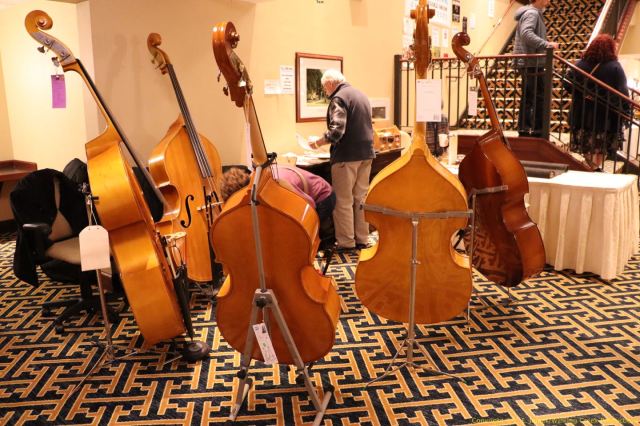 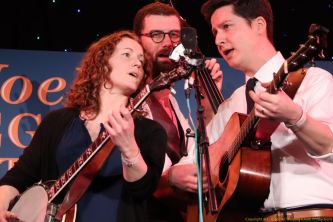 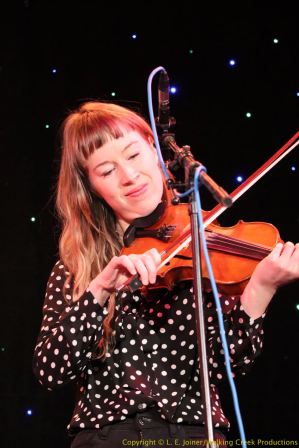 I was delighted to see a band that I had greatly enjoyed two years before, Jeff Scroggins & Colorado, back at the Joe Val Festival.  They were billed ‘with Jesse Brock‘, master mandolinist taking the place of Jeff’s son, the incredibly energetic Tristan (off on his own in Nashville, I think Jeff said). Tristan I guess was the harbinger, as the evening’s performance was tempered with the news that this would be the last performance of the band—all were going their separate ways.  A pity, as it was a great band: Jeff Scroggins (banjo), Greg Blake (guitar, vocals), Ellie Hankanson (fiddle, vocals), Jesse Brock (mandolin), not to mention the inimitable Mark Schatz (bass).  [Click on one to see larger versions in sequence; go to Flickr for high-res versions.] 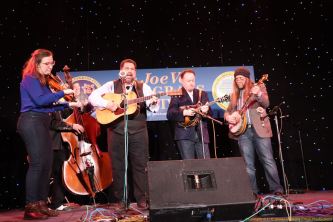 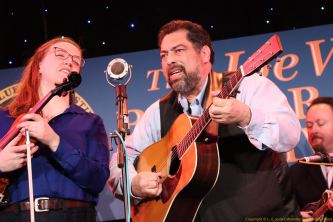 Sadly I had to leave before Claire Lynch‘s set Friday night.  Saturday evening I got back in time for the Boston Bluegrass Union’s Heritage Artist Award to Boston’s own singing dentist (and mandolin player) Ritchie Brown (sorry, ‘Dr. Richard Brown).  Here he is on stage, plus the BBU’s Gerry Katz. [Click on one to see larger versions in sequence; go to Flickr for high-res versions.] 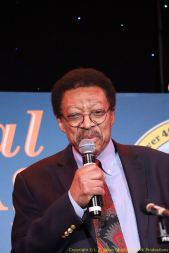 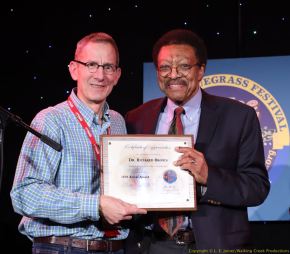 Then it was time for The Po’ Ramblin’ Boys, arguably the hottest traditional band on the circuit today, for their second shot at the JVF, sporting their new Rounder album, and now-regular fiddler Laura Orshaw—plus C. J. Lewandowski (mandolin), Jereme Brown (banjo, not a typo), Josh ‘Jug’ Rinkel (guitar), Jasper Lorentzen (bass). [Click on one to see larger versions in sequence; go to Flickr for high-res versions.] 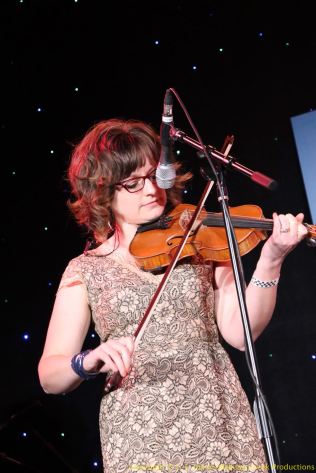 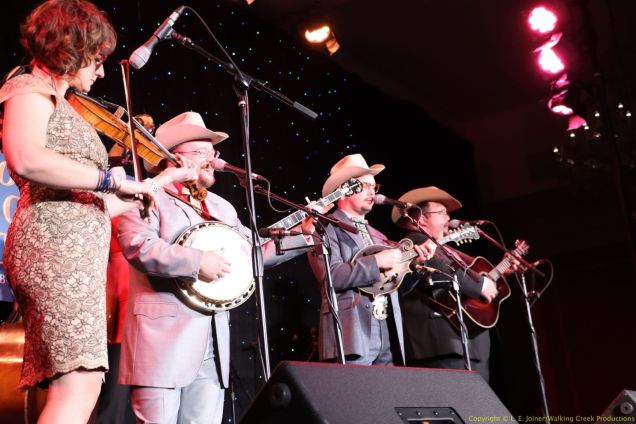 Now towards the end of the Po’ Ramblin’s set when they brought up their bus driver to sing a couple of songs, I didn’t realize that he was (a) the banjo player Jereme’s dad, and (b) Tommy Brown, of Tommy Brown and County Line Grass, whom I’d been playing on the radio for years!  Tommy Brown always struck me as right smack in The Stanley Brothers tradition, and he sure brought his son up right.  An unexpected treat! 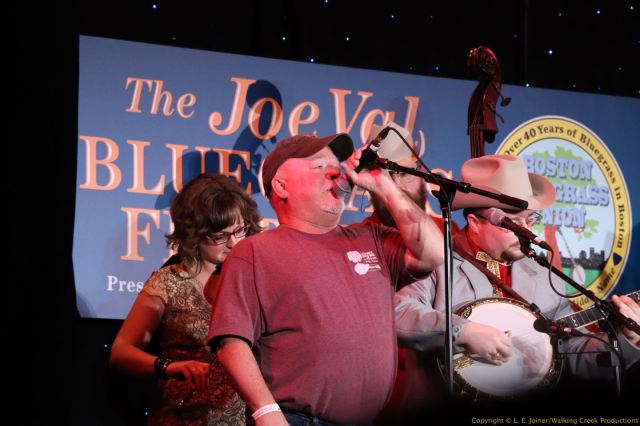 The Special Consensus are the closest thing to JVF regulars that I can remember, and never fail to deliver.  Greg always remembers playing at WHRB back in the days of the Kinvara Pub in Allston (when Chris Jones was in the band), and always promises to come back some day—which I’m sure he would, if they were in town at the right time.  I enjoyed meeting Rick Faris, as I’ve been playing a lot from his excellent new album.  Greg Cahill (banjo), Rick Faris (guitar), Nate Burie (mandolin), Dan Eubanks (bass).  [Click on one to see larger versions in sequence; go to Flickr for high-res versions.] 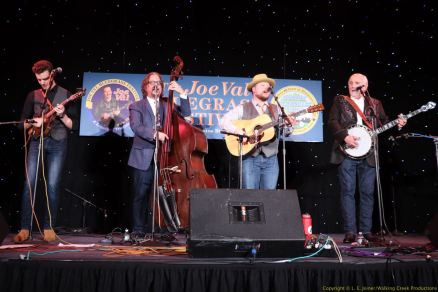 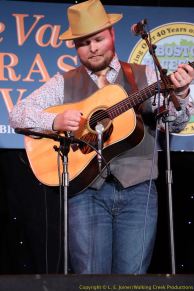 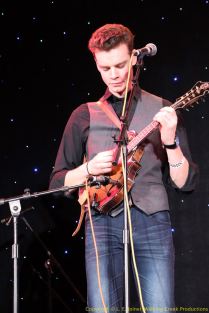 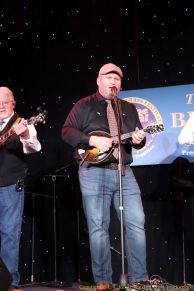 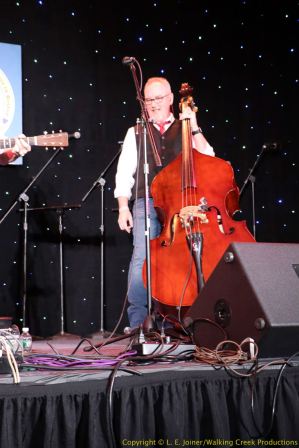 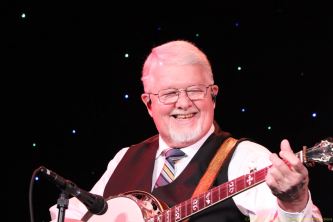 Laura Orshaw (fiddle) is now doubling (or tripling or quadrupling if you count her own band and others in the Boston area) with Adam Bibey & Grasstowne, whom I caught on Sunday afternoon.  And who else is in the band, at least for this gig?  Tony Watt on guitar!  The rest: Alan Bibey himself (mandolin), Justin Jenkins (banjo), Zak McLamb (bass).  [Click on one to see larger versions in sequence; go to Flickr for high-res versions.] 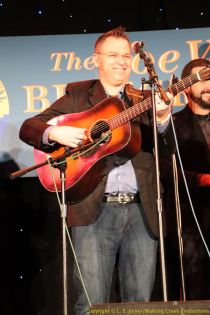 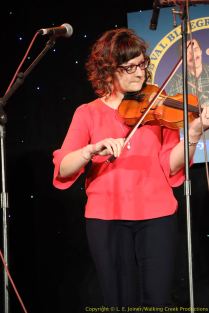 Sunday afternoon is traditionally winding-down time at bluegrass festivals, with folks packing up to go home.  But the Joe Val Festival is at an hotel, so a few years ago the BBU were inspired to turn the last act on Sunday into a rousing closer.  I must admit I was a little dubious when I heard they were bringing in The Dan Tyminski Band for the finalé.  Yeah, I knew Dan was famous in the Soggy Bottom Boys in that awful slam-at-the-South movie, was Alison Krauss’s leading sideman, and had won numerous awards for all kinds of musical adventures, but he wasn’t really bluegrass country.

I was wrong. Dan put on a terrific bluegrass concert, interspersed with plenty of jokes and comaraderie.  He made himself at home, and the audience reciprocated.  It was one of the most entertaining shows I can remember, and plenty country.  Dan also played new songs he either wrote or co-wrote, which will appear this fall on a new Rounder album.  I can’t wait.  Dan Tyminski (mandolin), Justin Moses (fiddle), Jason Davis (banjo), Tim Dishman (bass), Tony Wray (guitar).  [Click on one to see larger versions in sequence; go to Flickr for high-res versions.] 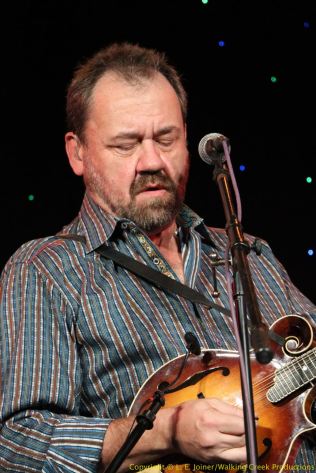 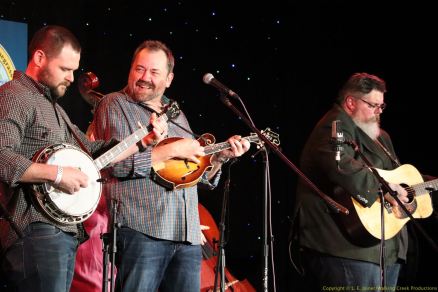 We hung around for the Festival’s Wind-up Hoedown dance in the Showcase Stage room, featuring Josie Toney and Her Honky Tonk Heroes.  Josie had played a bluegrass set earlier in the day in the Showcase, which I had missed.  But for the dance she turned to classic country, and did she do it well!  I was mightily impressed, at both her repertoire, her stage presence, and her voice.  Another record I’ll be looking to play on the air, when it comes out.  Josie Toney (guitar, vocals); I didn’t get the names of the others, but if anyone knows, I’ll add them.  [Click on one to see larger versions in sequence; go to Flickr for high-res versions.] 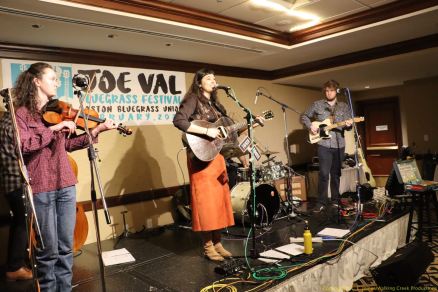 Didn’t catch much of the lively old-timey band that followed Josie (and I missed their Main Stage performance), but need to get some recordings!  The Lonesome Ace Stringband from Canada are Chris Coole (banjo), John Showman (fiddle), Max Heineman (bass).  [Click on one to see larger versions in sequence; go to Flickr for high-res versions.] 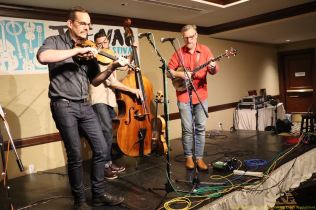 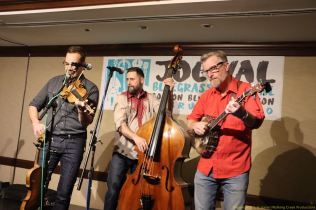 Chalk up another one for the BBU!  Hey, that’s a song!  So for looking at all these silent photos, here’s a little classic audio for you, from Jimmy Martin.  /CL

1 Response to Photos from the 2020 Joe Val Festival