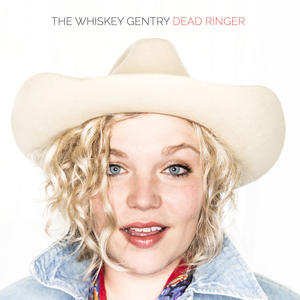 “It was a face I’d seen a thousand times at every Derby I’d been to.  I saw it, in my head, as the mask of the whiskey gentry – a pretentious mix of booze, failed dreams, and a terminal identity crisis; the inevitable result of too much inbreeding in a closed and ignorant culture.” —Hunter S. Thompson

When Lauren Staley Morrow came across this quote from Hunter S. Thompson, she envisioned being in a band called The Whiskey Gentry.  Within two years, that vision was a reality. . .
—Dave Stallard, Blue Ridge Outdoors

When The Whiskey Gentry’s Dead Ringer arrived last year, I paid attention, as I’d liked their previous album, Holly Grove (though the title song was a bit on the gruesome side). The new album knocked me out. This band has bluegrass origins, but their hearts are straight honky-tonk country, and they manage to play the Americana ‘jam-band’ game without succumbing to the noisy and trivial. How? By celebrating the startling writer and singer in their midst, the ineffable Lauren Staley. That’s her face on the cover, and she’s the ‘Dead Ringer’, though her name is nowhere on the outside.

Lauren Staley Morrow is married to guitarist Jason Morrow, and the two are the heart of The Whiskey Gentry. Lauren and Jason kick serious butt with ‘Dead Ringer’, ‘Rock & Roll Band’, and ’Martha from Marfa’, and others, verging on rock-’n’-roll, but Lauren writes country songs. In ‘Dead Ringer’ she describes herself as ‘a country-folk singer’:

Now I play one-four-five chords in the key of G
Hoping everybody will look at me
And tell me ‘Good job’ at the end of the show;
And I’m a half-drunk full-broke country-folk singer
And everybody tells me I’m a dead ringer
For a more famous girl—on the radio.

And then Lauren turns around and covers Merle Haggard’s sad ‘Kern River’ (even though she’s a girl), sings her own plaintive lament, ’Is It Snowing Where You Are?’, and follows that with a simple love-song that might have done Merle proud: ‘If You Were an Astronaut’. This album generates calls when I play songs from it: ‘Who was that?’ If Lauren can keep writing and singing, at some point the fools in commercial country radio are going to realize that ‘Alt-Country’ is ‘Real-Country’ and The Whisky Gentry (and J. P. Harris, and Chris Stapleton, et al.) are the Real Deal. Then TWG better put Lauren’s name on the cover.

Color this one a HIT.

PS Some of the songs on this album contain the ’s’ word. Radio promoter Al Moss kindly gave me downloads of bowdlerized versions to play on the air. /CL

Great to hear from you, and thanks. Not sure if you are aware that Lauren has a new EP. They’re (Lauren and Jason) changing the branding from The Whiskey Gentry to Lauren Morrow. Perhaps they read your mind (“Then TWG better put Lauren’s name on the cover.”) Perhaps you knew already, or perhaps the timing of your previous review is just ironic