Why I Cancelled Barbara Martin Stephens

I’ve been wondering whether I needed to explain this at all, but I did mention it on air, so if anyone is curious, this is what happened:

Barbara Martin Stephens lived with Jimmy Martin from 1953 to 1966, and had four of his children (they were never married, and Tennessee has no common-law marriage statute). Last year she published a book about her life with Jimmy and thereafter, Don’t Give Your Heart to a Rambler: My Life with Jimmy Martin, the King of Bluegrass (University of Illinois Press, Urbana, 2017).

Back in January, Ken Irwin (Rounder Records) mentioned that Barbara Martin Stephens would be coming North in the summer and was looking for opportunities to promote her book. I responded,

I might well be interested in interviewing her on HAH, especially if the conversation could focus on Jimmy Martin’s history, and if we could juxtapose talk with plenty of Jimmy Martin songs—much as I did with David Johnson and his book on the Stanley Brothers.

Feel free to pass this on to whomever might be doing promotion for the book.

Then in April I got an inquiry from a representative of an outfit called ‘Handsome Ladies, Women in Bluegrass’, named Cindy, who put me in touch with Barbara Stephens. We arranged for her to come to WHRB on June 16th, a week before she was scheduled to appear for a Jimmy Martin tribute at the Jenny Brook Bluegrass Festival. I was enthusiastic at that time, telling Barbara:

I’m a long-time fan of Jimmy Martin’s music, and have played him on the radio for many decades.  It will be a great opportunity to revisit some of the music, and learn about his life with you. . .

Hillbilly at Harvard is an informal show, running from 9 AM to 1 PM (Eastern time), and I can certainly spend an hour or two with you, providing we play enough music.  What might make the most sense is to proceed chronologically, relating the events in your book with the songs that he was recording at the time. Since HAH is a country show, our listeners would enjoy hearing about your experiences with others in the country and bluegrass fields, too.

She arranged for me to get a copy of her book, which I began to read. It was a revelation, though not as it developed a pleasant one. I knew of course that while Jimmy Martin was a terrific musician, he was a roustabout, if not worse. I had a hint of this way back in 1981, when I reviewed the Berkshire Mountains Bluegrass Festival for The Boston Globe:

The Seldom Scene, from Wahington, D.C., led by the quixotic John Duffey, performed with their usual alacrity, and drew their usual ovation. Jimmy Martin, on the other hand, following a reportedly successful show on Friday evening, fell flat on Saturday, despite his coarse jokes and constant entreaties. “Is everybody happy?” he kept asking, while the wind grew chilly and people gazed anxiously at black clouds. . . 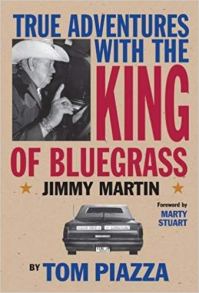 Then there was the slim 100-page book that music writer Tom Piazza wrote, originally a magazine article, with the imposing title, True Adventures with the King of Bluegrass (Vanderbilt University Press, 1999). It mostly described a backstage visit to The Grand Ole Opry with Jimmy, who at his irascible and chronically inebriated best managed to insult Ricky Skaggs and started after Bill Anderson: “I’m going to knock his ass right off him.” We never learn what Jimmy had against Bill, but Ricky apparently wouldn’t sing harmony with Jimmy on some earlier occasion, and Jimmy never let go of a grudge. In a blurb the publisher put on the back cover of Barbara’s book, Bill Anderson writes:

Jimmy Martin was a sparkling stylist. both as a singer and a guitarist, a brilliant showman whom few could follow onstage, and a tortured soul who once, when I simply said hello to him at the Grand Ole Opry, threatened to whip my ass right there on the side of the stage.  I met Jimmy early in my career and I thought I knew him fairly well.  After reading Barbara’s painfully honest portrayal, however, I realize I hardly knew him at all.

Maybe unbeknownst to Tom Piazza, standing backstage at the Opry, amidst the country and bluegrass stars Jimmy knew well, would have fanned the embers of resentment that he bore for having been denied membership in that celebrated club. From the first days the young Barbara Gibson knew him, his fondest desire was to be recognized among his Opry peers. That was to never be, and for what it is worth, we now know why: her name was Melissa Monroe, Bill Monroe’s daughter, whom Jimmy was seeing even when he started dating Barbara. She describes an encounter with Bill at the DJ Convention in 1962:

That was worth knowing, as are many of the other tidbits about the music business that enliven Don’t Give Your Heart to a Rambler.  But as I spent more time with the book, it began to seem more like the old True Confessions magazine, a constant litany of personal detail. I told Barbara, “Your memory of events from years past is amazing. I suppose living through such a long emotional roller-coast will impress a lot of details on you, which might have otherwise have been forgotten.” Just an example at random, from the late ’50s, when Jimmy and Barbara were living in Detroit and Jimmy was working with the Osborne Brothers:

One morning in Flint, while Thelma [Jimmy’s aunt] and I were making breakfast after the boys [Jimmy and his uncle Oscar Fields] had been out drinking the night before, Jimmy came into the kitchen and said, “We really liked that potted meat you had in the refrigerator.  Buy that same kind next time.”  Thelma and I almost fell on the floor laughing.  They had eaten dog food and liked it.  When we told them, they were nonchalant and said, “It was good.” (p. 49)

That was funny, but after a while the documentary detail became wearying, and increasingly sordid. The babies kept coming, Jimmy kept drinking and cheating, and then began to get violent. There was a constant backdrop of interactions with relatives and friends and many others, some with famous names. It was interesting to learn how Barbara began to take over booking Jimmy’s tours—and eventually others’ as well, as she was one of the very first women to become a professional booking agent. But there was precious little about the music itself. The book, I began to understand, was really about Barbara Martin Stephens, not about the music, not even about Jimmy, and for me just reading it was becoming increasingly distasteful. Finally, on June 5th, I wrote her:

Since my last response to your note, I’ve been reading more of your book, and I have to tell you I’m disappointed.  You write well and engagingly, and with great honesty, but it’s all about personal issues, not about bluegrass.  It tells me nothing about Jimmy’s music, about the way he crafted and developed it, and how he worked with so many of the other talented musicians in his bands.

Hillbilly at Harvard is a music show, not one for celebrity gossip or revelations, and I think it would be a disservice to the audience to spend any time talking about strictly personal matters.  Many people might find them compelling, but they are subjects for a different kind of program.  So I regret to say I must cancel our interview on the 16th.

I can tell that you are an engaging, friendly person, and I’d enjoy meeting you.  But I simply cannot promote a book to my listeners that I myself don’t see positively.

True or not, I never got the impression that Barbara really liked bluegrass or country music. Her book can be viewed as a graphic case study of the difficulties women have had in disentangling themselves from abusive marriages, especially half a century ago. If I were running a different radio program, as I said, I’d have welcomed Barbara into the studio, but HAH is all about the music, and I certainly could not have given those issues adequate voice.

Barbara was unhappy with my decision, but I had been increasingly concerned by the incongruity of book and impending show, so it was a relief for me. I had no illusions about Jimmy’s character, but I had no great desire to spend a couple of hours trashing it. To be fair, Barbara does make it clear that, overall, Jimmy was not irredeemably vile.  So let us close with her warm assessment, her perspective in her 82nd year, from the Preface to Don’t Give Your Heart to a Rambler:

Jimmy was a kindhearted man and a father who cared deeply for his children but was unable to let them know it.  He was a terrific entertainer and singer, a man who suffered humiliation and coped with it in ways that only further injured his pride and his standing in the music world.  He was often misunderstood.  He hid behind the “don’t care” façade he built around himself.  Now you will know the reason for his behavior as well as my part in it—both good and bad. (p. xiv)

3 Responses to Why I Cancelled Barbara Martin Stephens