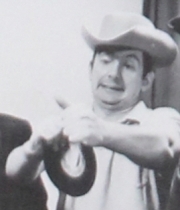 If you’ll look at my post from last September on Hillbilly at Harvard in the 1960s, ‘HAH History: The Committee Saves the Show’, and scroll down, you’ll see a photo entitled “The boys review the latest Glen Campbell record.” Ol’ Sinc is in the process of tearing a single in half. That tells you what we thought, in those days (the late 1960s) about Glen: he was a pop singer, not country enough for HAH.

And so he was. A son of Arkansas sharecroppers, he was a young guitar virtuoso who in his 20s made his way to Los Angeles, where his agile musical chops led him to the recording studios as part of the first-call Wrecking Crew, a collection of musicians who worked for artists of all styles, from Frank Sinatra to The Monkees to Merle Haggard, even The Beach Boys. And he could sing. Glen toured with the Beach Boys as a replacement for Brian Wilson, and was invited to join the group, but smartly elected to pursue a solo career.

His first single in 1961 was a straight pop record on Crest, a song that Glen wrote called “Turn Around, Look at Me.” But then a year later he was signed by Capitol Records and was featured in a somewhat poppy bluegrass record with a group called The Green River Boys. There’s probably a story here, but I don’t know it; it wasn’t a very good record. Capitol was evidently trying to find a niche for him, hence The Astounding 12-String Guitar of Glen Campbell (which we had in the HAH library—have to look for it!) and The Big Bad Rock Guitar of Glen Campbell (never saw that one). Then there came “Burning Bridges” (a Jack Scott song) and then the unlikely poetry of John Hartford, “Gentle on My Mind,” with Glen’s sensitive voice captivating radio listeners across the country and pop spectra. The song, says Wikipedia, is “ranked number 16 on BMI’s Top 100 Songs of the Century.”  Listen to this Nashville-in-the-round version, with Glen throwing in a fantastic guitar break (thanks to Scott Johnson of PowerLine for including this video in his RIP post):

I’m not sure of the date of that video, but Glen Campbell was already a superstar, with hits like “By the Time I Get to Phoenix,” “Wichita Lineman,” and “Rhinestone Cowboy.” With his television show, and even the movies, he had managed to keep one foot in the country world, and another two or three feet in the pop world. But his Arkansas roots were never too far out of view. And they are gently revealed by producer, long-time friend and band-member Carl Jackson in a new album just released this spring, appropriately titled Adiós. 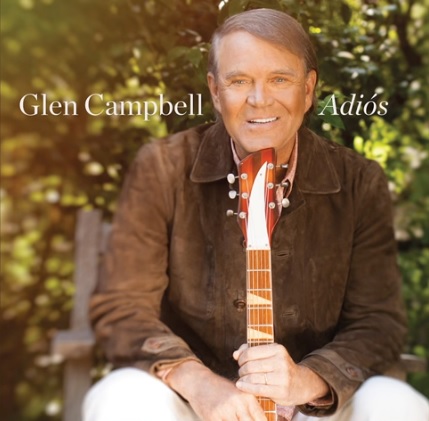 Glen recorded the vocals following his ‘Goodbye Tour’ in 2012, when it was announced he was suffering from Alzheimer’s Disease. Writes his (fourth) wife of 34 years, Kim Campbell, in the booklet notes to Adiós:

A new Glen Campbell album coming out in 2017 might seem a bit odd since he hasn’t performed since 2012, and even more odd – if not absolutely amazing – when you consider that he has Alzheimer’s disease. Glen’s abilities to play, sing and remember songs began to rapidly decline after his diagnosis in 2011. A feeling of urgency grew to get him into the studio once again to capture what magic was left. It was now or never. . .

Just as our new reality began to sink in, fate found us spending an afternoon with Carl Jackson . . . We reminisced about all of the songs that Glen had always wanted to record but had never gotten around to. Conversation sparked inspiration and the wheels were put in motion. . .

The process of capturing Glen’s vocals for Adiós was heartbreaking at times. . .Glen was barely able to remember the words he was singing at times. Carl held up sheets of paper with large print lyrics and fed them to him one line at a time. Although he struggled at times, he was clearly ecstatic about being in the studio. The songs flowed freely and clearly straight from his heart, and his voice and tone are still remarkably…unmistakably…him.

And indeed they are. Glen Campbell released more than 70 albums, many not so well known (see this Rolling Stone article,“Inside Glen Campbell’s Classic Forgotten Albums”), including a tribute album to Hank Williams, larded with strings, and most beyond my ken, but Carl Jackson’s song selection and tasteful—dare I say ‘country’?—production certainly elevates Adiós to ‘playable’ on Hillbilly at Harvard. Biggest treat for country-music fans is certainly a song by Roger Miller, “Am I All Alone (Or Is It Only Me),” introduced by Roger himself singing the first verse at a ‘guitar pull’ where Glen first heard the song (supplied by Roger’s wife Mary). Then we have Dickey Lee’s country anthem, “She Thinks I Still Care,” which Glen pulls off really well (though I’ll still take George Jones).

I have never cared for country-artists’ attempts at Bob Dylan’s “Don’t Think Twice, It’s All Right,” but Glen Campbell’s Jerry-Reed influenced up-tempo version made me think of Merle Haggard. There are four Jimmy Webb songs on the album, reflecting his longtime collaboration with Glen. They all have that jazz-standard feel, but they are all moving and worth hearing; the title song, “Adiós,” also made me think it could be one for the Hag.

I really wish Ol’ Sinc were around to hear this album. It’s 50 years since his comical ‘review’ photo, but I think he’d like it; it’s ‘country’ enough. Carl Jackson himself wrote a song about Glen’s rural origins, “Arkansas Farmboy,” which Glen sings beautifully. Carl says in the notes that he wrote it in the late 1970s:

The song was inspired by a story that Glen told me about his Grandpa teaching him “In the Pines” on a five-dollar Sears & Roebuck guitar when he was only a boy. That guitar led to worldwide fame and fortune, far beyond what even some in his family could comprehend. I remember Glen’s dad, Wes, asking our drummer, Bob Felts, at the Hilton in Los Vegas after Glen had become a household name… “Wonder what ol’ Glen makes an hour?”

Kudos to Carl Jackson and to Kim Campbell for making it clear with this album of songs that Glen had wanted to record, that he might have been a popular-music star, but he was also a country boy. Their reflections in the notes alone are worth the price of admission, and the whole album—design, notes, photography, production, and of course the singing and playing—is a masterpiece, a splendid tribute to a great artist. /CL