Dr Janie and I flew down to Raleigh on Wednesday, October 1st.  We would have taken the train, but it required a very early 6 AM departure and late (9 PM) arrival, so we opted for the “two hour” Jet Blue flight, which still consumed about six hours, but got us to the Marriott in Raleigh just as Stan and Gayle Zdonik and Sheila Selby were gathering for dinner.  The Marriott was ground zero for the World of Bluegrass festivities, and the IBMA had thoughtfully reserved a room for Wednesday and Thursday nights for us (reserved, but not paid, I should add, and we had to move to the Red Roof Friday—about a two-mile hike, which gave us some exercise and Raleigh sight-seeing, so no misfortune at all).  We had dinner at a toney restaurant called, enigmatically, Bolt, entertained by a chattery hostess from Philadelphia.

Afterward, Stan introduced me to the joys of showcase suites, in particular the Quicksilver Productions room, where with a good Raleigh IPA in hand, the affable proprietress Martha Stracener Dantzic played MC to some of Quicksilver’s top acts, among them. .  .

• I Draw Slow, a band as unusual as their name, a neo-old-timey, American-sounding, somewhat folky ensemble from Dublin (Ireland), surprisingly not a hint of bluegrass, but starring an absolutely captivating singer named Louise Holden, her brother Dave Holden on guitar and harmonies, along with Colin Derham, with playing clawhammer banjo, fiddler Adrian Hart, and Konrad Liddy on bass.  Here’s I Draw Slow (video from a different show):

• Town Mountain, a genuine hard-drivin’ North Carolina bluegrass band.  I missed them at Joe Val in 2013, but if they get back this year, I sure won’t.  Robert Greer plays guitar and does most of the leads; Phil Barker writes a lot of songs, plays no-holds-barred Bill-Monroe style manolin, and sings tenor; Bobby Britt plays a mean but lyrical traditional fiddle, and Jess Langlais an inventive, fits-in-neatly banjo.  Bobby and new bass player Nick DiSebastian are familiar here in the Boston area from the hot Berklee bluegrass stewpot.  Here’s “Tick on a Dog”:

• Frank Solivan and Dirty Kitchen, the virtuoso band from Washington, DC which won Instrumental Group of the Year at the Awards Show, with leader Frank also a nominee for Male Vocalist of the Year and Mandolinist of the Year, and banjo player Mike Munford a nominee for Banjo Player of the Year.  They are amazing players, capable of rejuvenating traditional numbers but also writing new music and pushing bluegrass to an improvisatory level on a par with the best jazz musicians in the world.  Here’s a promotional video from Compass Records:

Good introduction to the members of Dirty Kitchen (the name emblematic of Frank’s virtuoso cooking).  The others are bassist and vocalist Danny Booth, a longtime associate of Frank; and the amazing Chris Luquette on guitar.  More here.

There was more.  But it had been a long day, so I hove off to bed.  The next morning, Dr Janie and I took a leisurely stroll up Fayetteville Street toward the Capital, looking for a coffee shop for breakfast.  Finally happened upon a place called The Carolina Kitchen, where we savored the mild weather at an outdoor table, and then ambled back to the Marriott.  It was about 10:30, so I figured I had plenty of time to write out a short acceptance speech for the Awards Luncheon at noon.  But then I looked at the schedule, and saw that it was scheduled for 11 AM—oops!  I quickly scribbled down a few notes, threw on my jacket, and headed for the Convention Center, where we were treated to a chicken dinner (with tasty pecan pie) and a long series of speeches.

It was a bit unnerving waiting for my turn (“Unaccustomed as I am to public speaking,” at least where I can see the audience) , but eventually Ken Irwin, co-founder of Rounder Records, got up and generously lauded Hillbilly at Harvard, while a neat slide show (produced by Joe Lurgio at the IBMA from photos submitted by Cousin Stan, Ol Sinc’s former wife Helen Clougherty, and others—was the hot tub picture from Helen?) played on left and right screens, and I managed to ad lib a few remarks from my notes.  Everyone said they were fine, so I believed them, and now that was over, settled down to enjoy the rest of the festival.

Here are a couple of shots by the ubiquitous bluegrass photographer Darwin Davidson at the Awards Luncheon: 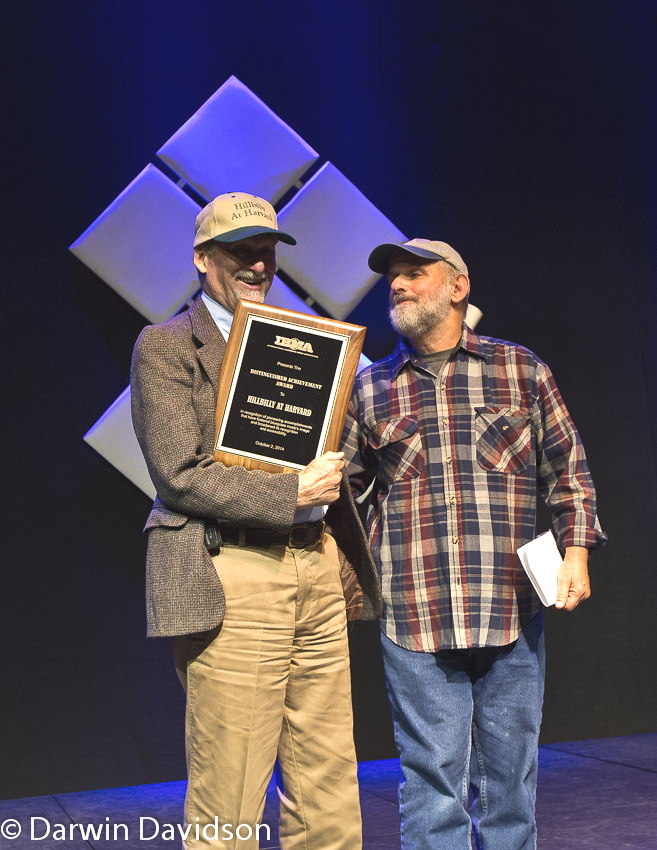 The camera shows off the suitcase wrinkles more than I knew. That’s Ken Irwin, basking in my fleeting glory. 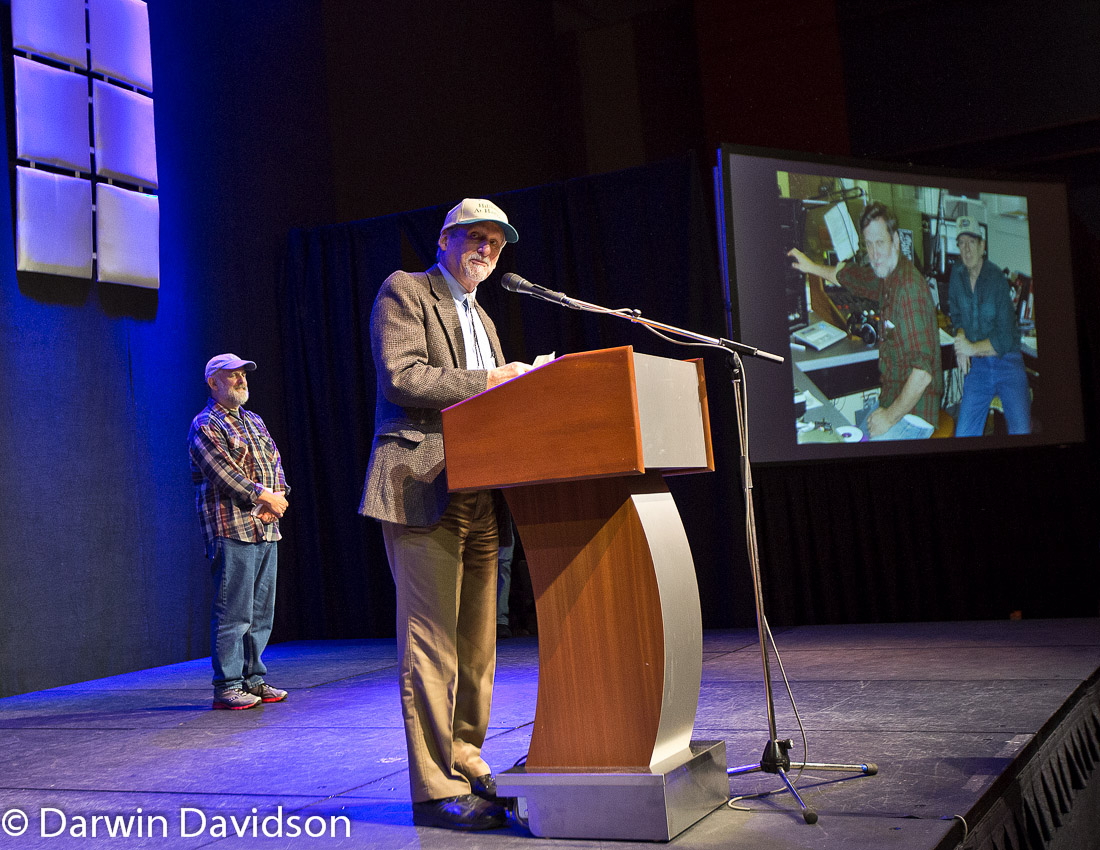 That’s Ol’ Sinc in the photo over to the right.  Thanks to Darwin for the use of these shots.  More about the award here.