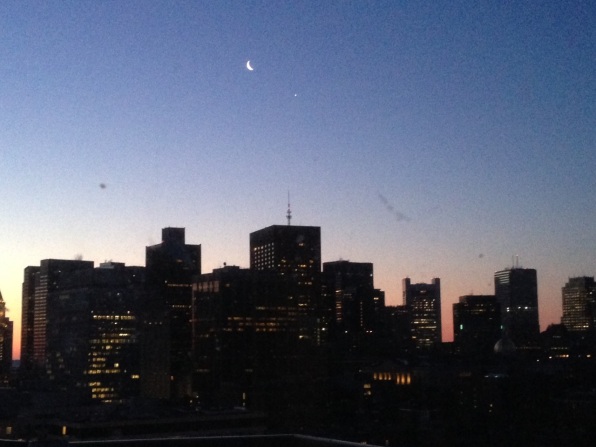 Taken with my iPhone from the 11th Floor window of my overnight room at the Massachusetts Eye and Ear building, after I was awakened at 5 AM Thursday for ‘vitals’ or something.  As Larry Flint tells me, “Hospitals are not for sleeping.”  Not a great photo, complete with smudges from the window, but the sight of the crescent Moon and Venus in the morning was worth waking up for.

Fortunately, it was only one night in the hospital; I’m now back on the river in Saxonville with one less thyroid gland (yes, we have only one each, though with two lobes, so some people lose only half).  It was extracted by Dr. Gregory Randolph, acknowledged by everyone at Mass Eye and Ear as “The best.”  Dr. Randolph is a developer of  “recurrent laryngeal nerve (RLN) monitoring during thyroid surgery,” which (as his audiologist explained to me before the procedure) enables the surgeon to identify and avoid damaging the nerves to the vocal chords in the larynx, a common risk in thyroid surgery.  But though I can talk, I’m pretty hoarse from the endotracheal (or breathing) tube, so as I mentioned on the show last Saturday, tomorrow’s will be pre-recorded.  I’ll be back on April 5th, for sure.

Looking at the lunar calendar, I see that what I thought was a waxing crescent moon was actually a waning one.  Nevertheless, I thought of it as a New Moon, which should be quite dark, but clearly the one in the great old song written by Governor Jimmy Davis (first recorded by Tex Ritter) was plenty visible:

“There’s a New Moon Over My Shoulder”