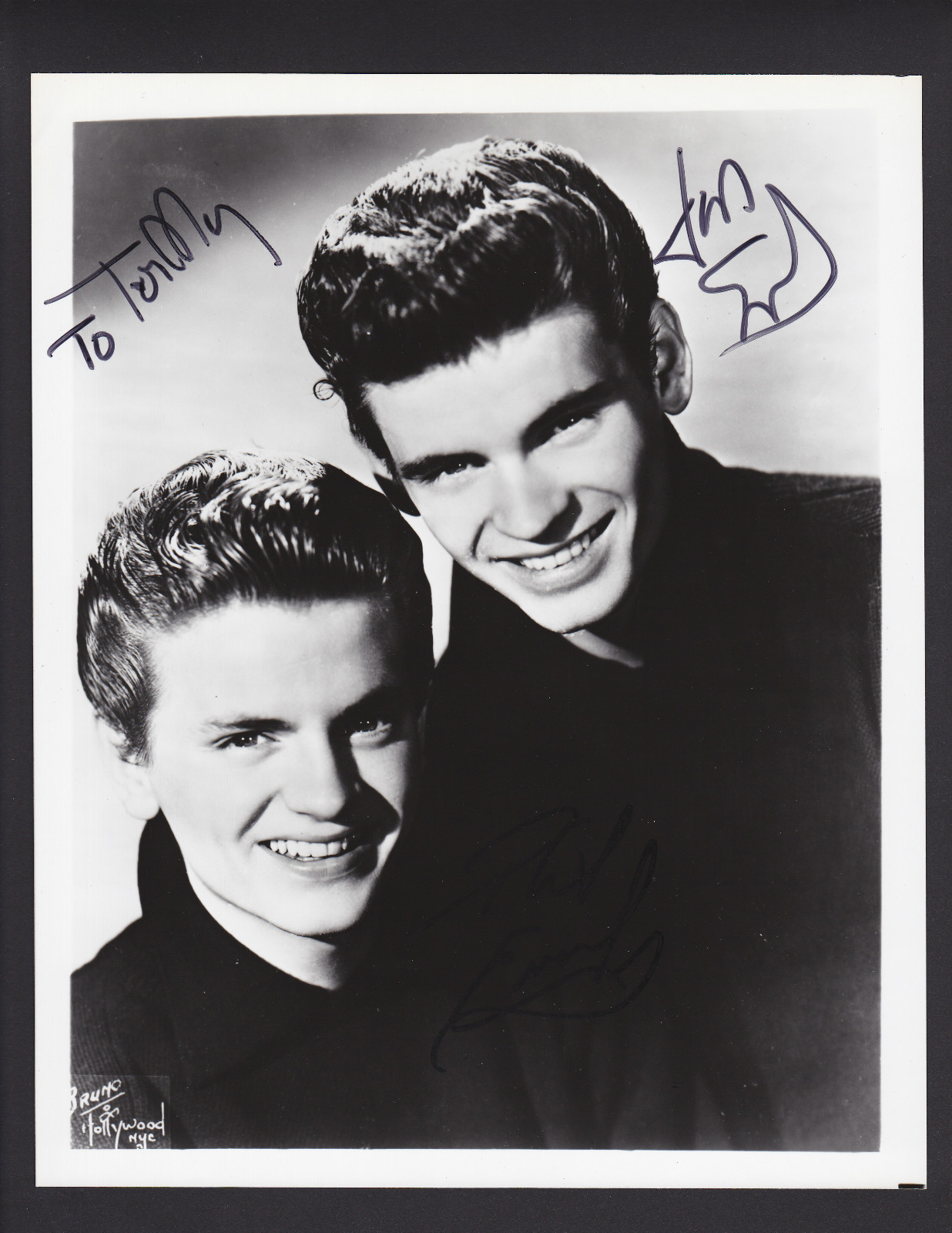 The Everly Brothers
By Bruno of Hollywood [Public domain], via Wikimedia Commons

We never have played much by The Everly Brothers on Hillbilly at Harvard.  Though they were certainly at the level of The Louvin Brothers as a country duet, and their roots were undeniably as country as it gets, they were playing rock ‘n’ roll.  To tell the truth, growing up I heard a lot more Everly Brothers than I did any country music.  Driving around in my dad’s red ’54 Ford convertible in Maryland, what I listened to was Bill Haley, Chuck Berry, Buddy Holly, and the Everly Brothers.  Were there any lyrics more titillating for teenagers than “Wake Up Little Susie” and “Bird Dog”?

That being said, country music, and all music, has suffered a great loss with the death of half of The Everly Brothers, younger brother and harmony singer Phil.

Phil Everly, Half of a Pioneer Rock Duo That Inspired Generations, Dies at 74

Phil Everly, whose hits with his older brother, Don, as the Everly Brothers carried the close fraternal harmonies of country tradition into pioneering rock ‘n’ roll, died on Friday in Burbank, Calif. He was 74.

The group’s official website said he died in a hospital near his home in Southern California. His son Jason said the cause of death was complications of chronic obstructive pulmonary disease.
With songs like “Wake Up Little Susie,” “Bye Bye Love,” “Cathy’s Clown,” “All I Have to Do Is Dream” and “When Will I Be Loved?,” which was written by Phil Everly, the brothers were consistent hitmakers in the late 1950s and early 1960s. They won over country, pop and even R&B listeners with a combination of clean-cut vocals and the rockabilly strum and twang of their guitars. . .

Phil Everly dies at 74; half of vocal duo the Everly Brothers:
The Everlys charted nearly three dozen hits in the late ’50s and early ’60s, among them ‘Bye Bye Love’ and ‘When Will I Be Loved.’ Their harmonies influenced the Beatles and Beach Boys.

Philip Everly was born Jan. 19, 1939, in Chicago, about two weeks before older brother Don turned 2. The children of two musicians, Ike and Margaret Everly, Phil and Don early on began singing on their parents’ radio show in Iowa.
The family moved through the South and Midwest, landing radio shows in different cities until the rise of television began to supplant radio as the preferred medium for entertainment.
The brothers credited Ike with teaching them all they knew about music. Ike Everly was an accomplished guitarist who reportedly influenced country guitar legends, including Merle Travis and Chet Atkins, and facilitated his sons’ recording career by introducing them to famed guitarist and talent scout Atkins when they were in their early teens.
Atkins connected them with Wesley Rose of Nashville’s famed Acuff-Rose Publishing, and Rose offered to get them a recording contract if they would sign to Acuff-Rose as songwriters. Rose introduced them to Archie Bleyer, who signed them to his New York-based Cadence Records label, and it wasn’t long before the hits began to flow.
“The Everlys took the country brother duet tradition one step farther,” historian Colin Escott wrote in the 2012 second edition of the Encyclopedia of Country Music. “They added Bo Diddley riffs, teenage anxieties and sharkskin suits, but — for all that — the core of their sound remained country brother harmony.”
A year after the family moved from Knoxville, Tenn., to Nashville in 1955, the Everly Brothers rocketed to No. 2 on the pop charts with “Bye Bye Love,” a song by Nashville husband-wife songwriting team of Felice and Boudleaux Bryant, the first of many songs by the Bryants that the Everlys would record, including “Wake Up Little Susie,” “Bird Dog,” “Problems” and “All I Have to Do Is Dream.”
Those songs are now perceived as remnants of a more innocent age, but “Wake Up Little Susie” was banned from many radio stations because its story of two teenagers being out together into the wee hours was considered too racy.
“It didn’t even enter our minds that anybody could object to it,” Phil recalled in 1984. “But if we’d called a press conference to deny it, nobody would have shown up. They were all off listening to big bands.”

There are a lot of Everly Brothers videos on YouTube.  But there’s a TNN documentary film called “The Life and Times of The Everly Brothers” (42:37) that I recommend highly.  It’s very well done; the only thing missing is an interview with brother Phil—Don does all the talking for the brothers:

UPDATE: Bob Greene, on CNN’s website, recounts how he and others regarded the harmonies of The Everly Brothers: “Something not entirely of this Earth.”

We were sitting in a corner booth at a rural cafeteria in Muhlenberg County, Kentucky.
Phil was talking about his older brother, Don. Having spent time with the Everly Brothers on the rock-and-roll road over the years, I had long noticed something:

Whenever they were performing, Phil fastened his eyes right on Don’s. As they were creating their heartbreaking harmonies, he seldom looked away. I didn’t want to ask him about that in front of his brother, but, with just the two of us there, I did.
“I have to pay attention every second with my harmonies,” Phil said. “It’s like playing tennis with someone who is really great. You can’t let your mind wander for even a microsecond, or you’ll be left behind.”

When Phil died this month at the age of 74, I recalled that conversation. I first met him and Don during my years on tour with Jan and Dean; there were occasions when we found ourselves as part of shows at the same venues, sharing the same backstage areas, dining at the same pre-concert buffets. There are a lot of unlikely things that I managed to become used to during those years, but one thing I could never get over — one thing that never ceased to feel like a dream — was knowing the Everly Brothers. Their talent, the beauty of their voices, was something not entirely of this Earth. They were a miracle. . .